Consider the terminology being employed by interventionists: President Trump’s actions in Syria have left a “power vacuum,” one that Russia and Iran are now filling. The United States will no longer have “influence” in the region. “Allies” will no longer be able to trust the U.S. to come to their assistance. Trump’s actions have threatened “national security.” It is now possible that ISIS will reformulate and threaten to take over lands and even regimes in the Middle East.

This verbiage is classic empire-speak. It is the language of the interventionist and the imperialist.

Amidst all the interventionist chaos in the Middle East, it is important to keep in mind one critically important fact: None of it will mean a violent takeover of the U.S. government or an invasion and conquest of the United States. The federal government will go on. American life will go on. There will be no army of Muslims, terrorists, Syrians, ISISians, Russians, Chinese, drug dealers, or illegal immigrants coming to get us and take over the reins of the IRS.

Why is that an important point? Because it shows that no matter what happens in Syria or the rest of the Middle East, life will continue here in the United States. Even if Russia gets to continue controlling Syria, that’s not going to result in a conquest of the United States. The same holds true if ISIS, say, takes over Iraq. Or if Turkey ends up killing lots of Kurds. Or if Syria ends up protecting the Kurds. Or if Iran continues to be controlled by a theocratic state. Or if the Russians retake control over Ukraine.

It was no different than when North Vietnam ended up winning the Vietnamese civil war. The dominoes did not fall onto the United States and make America Red. It also makes no difference if Egypt continues to be controlled by a brutal military dictatorship. Or that Cuba, North Korea, and China are controlled by communist regimes. Or that Russia is controlled by an authoritarian regime. Or that Myanmar (Burma) is controlled by a totalitarian military regime. America and the federal government will continue standing.

America was founded as a limited government republic, one that did not send its military forces around the world to slay monsters. That’s not to say that bad things didn’t happen around the world. Bad things have always happened around the world. Dictatorships. Famines. Wars. Civil wars. Revolutions. Empires. Torture. Extra-judicial executions. Tyranny. Oppression. The policy of the United States was that it would not go abroad to fix or clear up those types of things.

All that changed with the conversion of the federal government to a national-security state and with the adoption of a pro-empire, pro-intervention foreign policy. When that happened, the U.S. government assumed the duty to fix the wrongs of the world.

That’s when U.S. forces began invading and occupying other countries, waging wars of aggression against them, intervening in foreign wars, revolutions, and civil wars, initiating coups, destroying democratic regimes, establishing an empire of domestic and foreign military bases, and bombing, shooting, killing, assassinating, spying on, maiming, torturing, kidnapping, injuring, and destroying people in countries all over the world.

The results of U.S. imperialism and interventionism have always been perverse, not only for foreigners but also for Americans. That’s how Americans have ended up with out-of-control federal spending and debt that have left much of the middle class high and dry, unable to support themselves in their senior years, unable to save a nest egg for financial emergencies, and living paycheck to paycheck. Empire and interventionism do not come cheap.

The shift toward empire and interventionism has brought about the destruction of American liberty and privacy here at home. That’s what the assassinations, secret surveillance, torture, and indefinite detentions of American citizens are all about — to supposedly protect us from the dangers produced by U.S. imperialism and interventionism abroad. One might call it waging perpetual war for freedom and peace, both here and abroad. 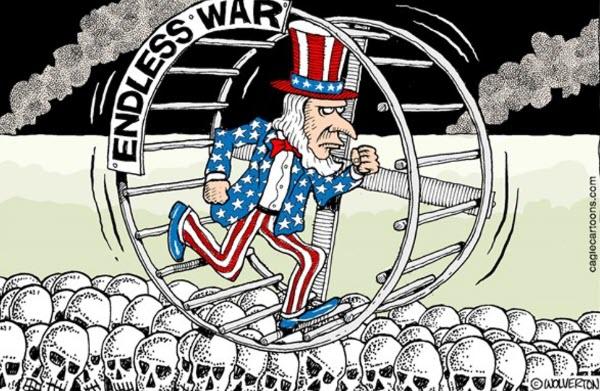 There is but one solution to all this chaos and mayhem  —  the dismantling, not the reform, of the Pentagon, the military-industrial complex, the vast empire of foreign and domestic military bases, and the NSA, along with an immediate end to all foreign interventionism. A free, peaceful, prosperous, and harmonious society necessarily entails the restoration of a limited-government republic and a non-interventionist foreign policy to our land.